BIRMINGHAM, Ala. (May 7, 2018 ) — Lightfoot, Franklin & White LLC has received significant recognition in the Chambers USA 2018 guide. It was again named a “Band 1” commercial litigation firm in the state of Alabama. This is the highest ranking given by the prestigious, independent referral directory for the legal industry. The firm is also ranked for its environmental litigation work, appearing in “Band 2” for Alabama. 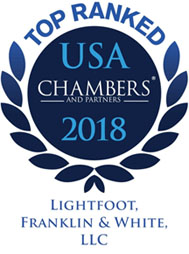 The newest edition of Chambers USA also recognizes five Lightfoot attorneys, one more than in 2017:

Franklin and Prater are two of only three attorneys in all of Alabama named by Chambers this year to Band 1 for general commercial litigation.

London-based Chambers and Partners annually ranks the leading firms and lawyers across the United States. Rankings are based upon independent research that assesses technical legal ability, professional conduct, client service, commercial astuteness, diligence, commitment and other qualities most valued by clients. The Chambers USA guide is widely read by industry-leading companies and organizations across the nation.