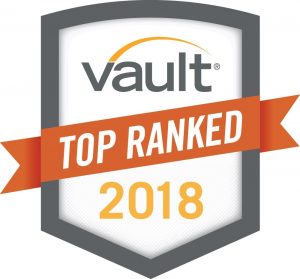 Lightfoot, Franklin & White LLC has been named the 2018 Best Midsize Law Firm to Work For by career and recruiting website, Vault. Lightfoot tops the list this year, besting the previous two-time champion.

The firm earned the ranking through high ratings in Vault’s numerous Midsize Quality of Life categories, including ranking as the top firm in Quality of Work and the second firm in Satisfaction. It also ranked in the top five for diversity and firm culture.

In responses to Vault’s survey, Lightfoot associates called the firm “a hidden gem” and that “from top to bottom, Lightfoot is made up of exceptional lawyers who are also exceptionally good people.”

“We’re honored to be ranked number one among midsize firms from across the country,” said Lightfoot managing partner Wynn M. Shuford. “This is a significant distinction — and a point of pride that we are included at the top of an outstanding group.”

According to Vault, it is the top resource, after individual law firm websites, used by law students and junior associates when researching where they want to work. They also rate it as the most valuable tool in their decision-making process. Vault is also among the five most-used research resources for laterals and clerks according to the survey.

The Best Midsize Firms to Work For rankings are derived from Vault’s Law Firm Associate Survey, in which associates rated and commented on various aspects of their work life. This year’s rankings include firms from across the country—including Alabama, California, Massachusetts, Colorado, New York and Washington, D.C.

“When candidates research law firms, especially those outside the realm of BigLaw, they’re often concerned more with the actual experience of associates than with the firm’s reputation,” said Matt Moody, Law Editor at Vault. “Current associates are best-positioned to know what life is actually like at any particular firm, and Vault’s Midsize Quality of Life rankings and firm profiles showcase associates’ experiences so law students and laterals get an insider's perspective and can make informed career decisions.”